The future of technology is in collaboration, students told

KITCHENER — The most innovative and creative inventions of the future will not be the work of lone geniuses, but of “communities of people collaborating together,” high school students were told at a conference on Thursday.

“There are worlds of possibilities, but it is communities of people with these skill sets collaborating together that achieve things,”

Charles Fraresso, senior manager of research and innovation at Christie Digital in Kitchener, told students at the student leadership conference put on by Mad Hatter Technology.

“It’s not just one person with a great idea. There are hundreds of people that are involved in these projects. If it is a movie, there may be thousands of people.”

About 250 high school students took part in the Kitchener conference and heard technology company leaders discuss their vision of where technology is going, and how today’s students can become part of creating the world of tomorrow.

Fraresso said he got into visualization by studying architecture.

“I got a job in the architectural field and then I happened to get a job with Imax as a theatre designer, and that opened up the world of visualization and how technology and architecture could be integrated together,” he said in an interview.

The digital projects people are working on today involve the fusion of creative, technological and scientific skills, he said. “Those integrated skills will lead to the highly sought after jobs of the future.”

The most important thing is for young people to be aware of the opportunities, he said. “That awareness will guide their journey.” 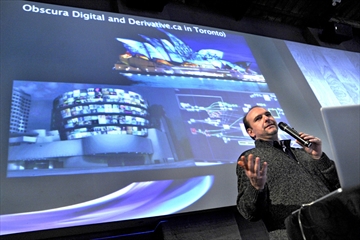 Fraresso told the students about projects that Christie is involved in, including “projection mapping,” which involves using projectors to “paint” images on the side of big buildings, or even onto mountains. Examples included the colourful display on the Eiffel Tower for its 120th birthday and the spectacular Image Mill display on huge grain silo buildings for Quebec City’s 400th anniversary celebration a few years ago

“We are constantly working with creative artists, with designers, with scientists and others who put all of this together,” Fraresso told the students.

He also talked about Christie’s virtual reality and simulation technology. Its virtual reality caves, similar to theStar Trek “holodecks,” are being used all over the world for training and education, as well as medical research and oil and gas exploration.

In the movies, directors like James Cameron are using high frame rate projection technology that Christie is involved in making, to create movies that are much more lifelike.

He also referred to other Ontario companies, including Derivative, which makes TouchDesigner visualization technology, and GestureTek Inc., both in the Toronto area.

“There are a lot of Canadians who are pioneers in this technology,” he told the students.